Rabbit As A Spirit Guide

When Rabbit crosses your path:
~ Move quick! Take advantage of the unexpected opportunity in front of you or it may disappear.
~ Be highly vigilant; if something doesn’t feel right, remove yourself from the situation as quickly as possible
~ Let go of your fears. Focus on the positive so that you will attract the positive.

Think about Rabbit:
In fear,

they stay very still long enough to be acutely aware of what is going on around them. But their lives depend upon moving quickly, once they identify that fear, and when they move, they move by ‘leaps and bounds.’

They are vegetarians, so they are light in their movement and able to move quickly, even from a frozen position.

Call on Rabbit energy when:

Hawk as an Animal Spirit Guide

When Hawk crosses your path:

~ Step back and gain a greater perspective on a difficult situation
~ Eliminate distractions and stay focused on your goal or task
~ Be acutely aware of your surroundings for any messages that Hawk or Spirit brings
~ Be prepared to protect yourself from personal or psychic drains
~ Stop trying to control others or the situation, work on accepting and appreciating all that is in the present

Think about Hawk:
They are exemplary fliers with extraordinary strength and speed. They go so fast, they need to pick a direction (priorities) and take it They have the best eyesight of all the animal world. Their visual acuity (ability to see clearly) is 8x’s greater than ours. They are keen hunters, staying focused on their prey. Hawks mate for life, have home ‘territories’, and furiously defend their homes and families.

Call on Hawk energy when:

— You have gotten caught up in the minutia of a situation and need to gain perspective
~ You’re having trouble accepting that a situation is not going the way in which you ‘planned.’
~ You’re feeling depressed and need to ‘lift your spirits’
~ You’re working on a project or task that needs intense focus
~ You’re being verbally or psychically attacked and need to defend yourself
~ You know there are messages being given and you need to figure out what they are

Raccoon as a Spirit Guide 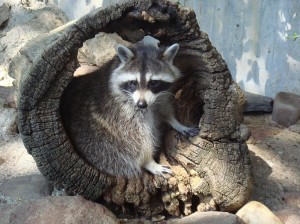 When Raccoon crosses your path:
— Set aside any doubts you have and know that the resources you need will be there for you (analogous to the Magician card in the tarot.)
— Adopt a more relaxed attitude; open yourself up to the joy of curiosity and ‘open-ended’ exploration* of life.
— Be aware of any signs or omens you may be getting from those close to you on the other side.

Think about Raccoon:
They are adaptable to many types of living situations. They are extraordinarily clever, curious & resourceful. They have dexterous paws which help them get things they want, such as opening lids and latches to things, which might not be available to other animals. They are adventurous and courageously love to explore new things, yet they can be quite ferocious in defending themselves or their babies. They highly intelligent and have keen night vision.

Call on Raccoon energy when:

– You need manual dexterity for a task
– You are in a situation which calls for you to be more adaptable
– You need to find more joy and excitement in life, through exploration and adventure
– You need to feel comfortable with yourself despite what others think of you

Pelican as an Animal Spirit Guide

When Pelican crosses your path:
— Forgive yourself
— Let go of resentment towards others
— Let go of that which ‘weighs you down’, be it material, emotional or mental

Think about Pelican:
They have that large sack with which to fish. They can fish abundantly with it, but know that it needs to be empty to have the freedom of effortless flight. They swallow the fish and empty the water out of the pouch. They know when to let go.

Pelicans know how to adapt to the conditions in which they live. Despite their large size, they are deceptively light. This makes them buoyant and they float effortlessly on the water. And although, they may, at times, have trouble taking off from the water’s surface, they persevere, not allowing themselves to get bogged down in the water. (symbolically, water = emotions)

Pelicans are very social beings. They live in cooperative colonies, teaming up to fish, and they nest away from species with whom they may have conflict.

Pelican medicine teaches us:
–That no matter how heavy our burdens, we will always rise to the top
— How to forgive ourselves, by releasing ourselves from that which bogs us down
— How to ‘team up’ with others in harmony and cooperation

A Surfer’s Understanding of Animal Communication
By Lawrence Larson, Esq.

I just finished riding a small, waist high wave, that collapsed in front of me. My attention was diverted from the wave, to a pelican about a hundred yards north of me. 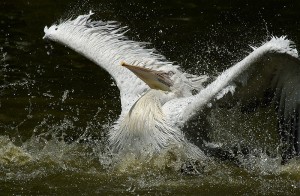 The bird rested in the water about 25 yards directly seaward from the end of a small Northern San Diego County jetty. One of the Pelican’s wings was stretched out from his body, at a 45 degree angle. It was in a deformed position, as if it had been broken or disjointed.

It was early in the morning and the sun was just squinting over the hills, which were awaking and exhaling an autumn chaparral scent. I became entranced by the whole scene. The ocean stood motionless, a dark limpid ink shade with the texture of grey-blue tiffany glass. The sea’s surface was imbued by chimeric shadows which made me altogether unsure of what I was seeing. As I stared, trying to account for the vision, there was a feeling of disconnect, the creamy adorned feathers of the pelican, it’s disfigured stance, contrasted eerily with the darkness of the ocean.

Near me, there was one other surfer in the water. Beyond him, outside of the line-up, was akayaker paddling through the bay, I watched the pelican for another minute in his haunting pose. The realization hit me. A shore fisherman on the jetty had hooked the pelican on the wing and was holding the line taut, extending the bird’s wing. 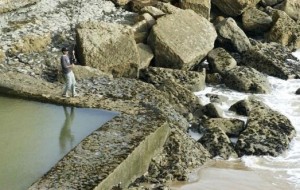 I yelled about three times, each time more insistently for the fisherman to cut the line. Reluctantly, he reached for his sheathed knife and cut the fishing line. The birds wing fell, and laid straight out from its body on the top of the water.

I began to paddle in the direction of the bird. The other surfer, who noted that he was a biologist, warned me about getting too close to the pelican, as they are fierce fighters and their prehistoric beaks have evolved into formidable defensive tools. The kayaker sensing my curiosity, paddled in a swing cadence toward the animal. His swifter water vehicle neared the pelican before I did. As he cautiously approached the distressed bird, the pelican ranted and employed his strong neck and long beak as a weapon to threaten and fend off the interloping kayaker. The outburst sent the kayaker quickly back to the bay. I knew the pelican lashed out because he was terrified. He did not know why he was maimed. The kayaker and myself were the only people near him and it was a small leap in reason for him to think we were the marauders intent on his capture.

As I approached the magnificent creature, I slowly, smoothly and quietly slid off the surface of my surfboard, trying to leave the water and the pelican undisturbed. I slowly dog paddled toward him, talking in a calm voice. In Hawaii, we greet friends, loved ones and strangers with Aloha. As I got within a few feet of this feral being, I looked at him and said “Aloha”. When one is graced with Aloha they are blessed with the divine light or in Hawaiian “Mana”. Mana is the abiding Hawaiian faith in the sacred divinity of man and nature. I came to the point were my face was a foot away from his face and I was looking straight up at this magnificent creature of God. I was treading water in the middle of the ocean, my surfboard a distant object bobbing to the undulations of the ocean. I was in his world, his domain and his imperial posture said as much. Again i said “ Aloha”. With that simple word Aloha, I assured him that I was a fellow traveler of the ocean and the divinity in me saw the divinity in him. 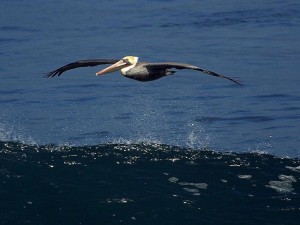 I have never had the patience, skill or manual dexterity to untangle wires, strings and things. Divinely guided this time, things were different. I cradled the wing in my hands and with the transcendent illumination, I decoded the hopelessly tangled fishing wire. It took about ten minutes to free the bird. The beautiful animal never took his gaze off me. He never flinched his wing. After his liberation, he slowly drew his wing into his body and even more intently fixed his eyes on me. Renewed, he slowly turned his body toward the sea, He swam about twenty feet without spreading his wings. He turned, looked at me and whispered “ Aloha my friend”. The Phoenix, renewed and restored; he spread his wings and in a magnificent arch, gracefully took flight into the heavy salt air. As he flew away, I wished him the same Aloha. The pelican was gone. The fleeting episode: a memory.
—
Pelican landing image: (C)2006-Stephane TOUGARD. Permission is granted for copy and use.