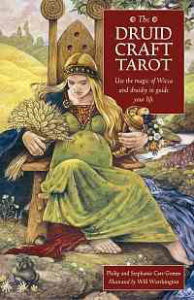 This is one of my favorite decks because of the beautiful artwork. If you like Celtic imagery and feel, this is the deck for you. The symbols and images are closely tied to the RWS imagery so it’s an easy read right out of the box. My only complaint is the size of the cards. While some people love the over-sized cards so they can see the beautiful artwork, I have very small hand which make this deck hard to shuffle for me. I do wish they would make a mini deck for these, or even standard size, but this is a small detail and should not deter you from a deck which, I my humble opinion is one of the finest and intuitive decks around.

This deck doesn’t use, cups, wands, pentacles and swords, but instead use water, fire, earth and air. The artwork is absolutely beautiful. It’s a beautifully spiritual deck.If you are interested in Native American culture, there are a lot of really beautiful decks out there, but this one has to be one of the nicest. 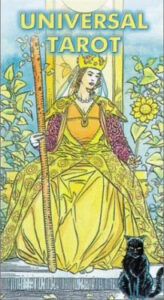 I like this deck because while it is very similar to the RWS deck in concept, the drawings have a touch of reality to them. The people look a tad less like caricatures and more like human beings in real situations.

This is a great deck if you want the simplicity of the RWS symbolism, but are tired of the same old images.

The Hanson-Roberts deck is a highly popular deck, for it’s unique  presentation. Staying in the tradition of the RWS deck, the drawings are close-up, fantastical versions. The colors are vibrant, and the images are beautifully drawn.

This is another deck which uses close-up images similar to those of the RWS deck, but in a different way than the Hanson-Roberts deck. The pictures are drawn with a little more down-to-earth and serious feel.

What is unique about this deck is the lack of borders. The pictures bleed all the way to the edge of the cards. I find these cards to have a lot of strength in them. They’re easy to read, and closely follow the RWS tradition.

The Connolly deck is very close, indeed, to the RWS tradition. The simplicity of the pictures are quite appealing and, from what I hear, it has its basis in Christianity.

I used this deck as my primary deck for years, but never consciously realized that the negative images of the traditional RWS deck have been toned down a bit. For instance, the Devil is called “Materialism,” and the Death card is called “Transformation.”

That didn’t make a difference to me, one way or the other when I was using it. I just saw the images, liked them, and used it. It would be a good deck for younger readers and also those who are a bit cautious of the tarot, but stepping their toe in. I also have this deck in mini but am not sure if it’s still available in that format.