These cards are “da bomb!” I love them. These cards are some of the most intuitive that I have. I absolutely love picking a “card of the day” or a “card for the situation” from them. Without exception, every card I have ever drawn from this deck has been right on.

Basically they have a picture of an animal, a key word for the animal, and an affirmation down at the bottom. It also has a cute little book which gives a little more in depth insight into the animal. These are great cards both to learn the meanings of animals, and as a card guidance. I can’t recommend these cards highly enough. 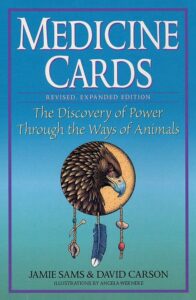 Medicine Cards: The Discovery of Power Through the Ways of Animals

Long a popular deck, for anyone who is interested in learning the meaning of animals and animal totems, this deck is a must. The deck comes not with the little pamphlet that many decks do, but an extensive book on the meaning of the cards. 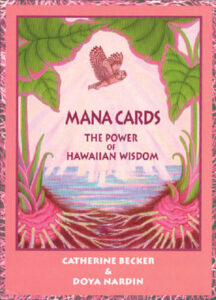 I love having this deck in my collection. I can’t say I read with it much, it is a complex deck. But the drawings are rich with Hawaiian meaning and culture. The author is a professor of Communications at University of Hawaii, Hilo.

If you’re interested in Huna and the Hawaiian culture, this is a great deck. It comes with several additional cards, on the back of which are the translations of the Hawaiian words which appear on the cards, and a brief description of the meaning of each card. 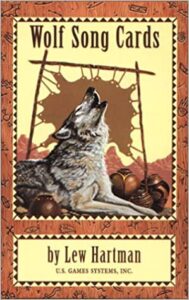 Another nice deck if you’re trying to learn the meanings of animals. On each card is a drawing of an animal with its name. In the included booklet, they give you the name of the animal, and key words and phrases to associate with that animal.

The deck is based on change, which are represented by four different types of wolves in the deck. According to the insert, “The meanings of the Wolf Song cards are a composite of…Native American mythology, folklore and the studies of the animal’s behavioral traits.”

This is not a deck I own, so I can’t personally recommend it. I just love animals, and it looks like a nice deck, so I wanted to offer it here.