Rush Limbaugh: In My Dreams

Okay, I’m not sure where else to put this, so here it goes: Last night I had a dream about Rush Limbaugh. I don’t remember all that surrounded it, it was one of those things where I woke up in the morning, laid there and thought, “What was that dream I had last night???” Thank goodness I remembered….

My husband and I were with our two cats. The perspective was from us standing up looking down at the floor. And on the floor was a miniature Rush Limbaugh. He was dressed all in red and he was walking on all fours. If you can get the image, it put me in the mind of the little space invader who tormented 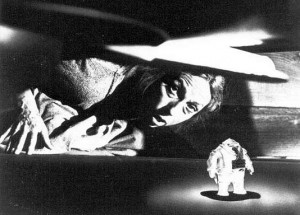 Agnes Moorhead in that famous episode of the Twilight Zone.

Just as one of us took a closer look and said, “Wow, that’s Rush Limbaugh” we realized that the cats were fascinated with him. And unlike what we would do to save a bird or a mouse if we saw that our cats might go after something and attack, we stood there watching the two of them pounce on him as he tried to scurry away.

It was only when I saw Rush’s head disappear within the whole of Makana’s mouth that we thought, “Awww, maybe we shouldn’t let this happen” but we were laughing too hard to care. They weren’t really hurting him or being aggressive or anything, they were just playing and tormenting him. (Much like he torments the world, I suppose.)

Right around the second time Makana started to go for his head, a policeman came in. Evidentially a right wing soldier had walked by, saw the happening of events and thought that our cats using Rush as a playtoy seemed to be causing him some sort of severe mental distress (not quite sure he’s capable of that much emotion, but I digress…)

So, the policeman rushed in, rescued Rush, the cats looked at us in wonder and I went onto other fascinating places in my etheric body which I am now unable to recall. If only we could find a wind-up version of Rush like that for the fun and amusement of our cats in waking life. Now that, would be a dream. 😉

A Time For Reflection

With the death of Osama bin Laden this past week, I thought it a time for reflection on the events that inalterably changed our

nation almost a decade ago.

Mr. Caat had a childhood friend perish on that day, a Port Authority Officer by the name of “Bruce Reynolds“, who gave his life trying to save others.

I have been fortunate enough to connect with him and his mother, who is now also in spirit, on a couple of different occasions, while doing mediumship readings.

This poem is for him and all those like him.

IN MEMORY OF HEROS

I didn’t know him,
But I know his name.
Like the thousands of other names on the list,
He had a story.

He cared, he loved,
He laughed, he cried.
He was the innocent child,
Who grew up to be a man;
A man respected, a man admired,
Who didn’t have to go, but did.

In the smoke and haze,
One by one,
He helped them out of disaster,
Back to safety in the arms of their families,
Then turned around to do it all over again.

His father planted flowers in a garden for him,
He hopes they will bloom by spring.
It would be appropriate for this child,
Turned into a man,
And that man, who turned into a hero.

For us, who never knew him,
But heard the stories of his youth,
Our hearts cry, for this man turned hero,
And all those like him,
Who died in the line of duty,
On one September day…
One very dark September day…